Letters to scattered family and friends

This is a chart worth pondering: 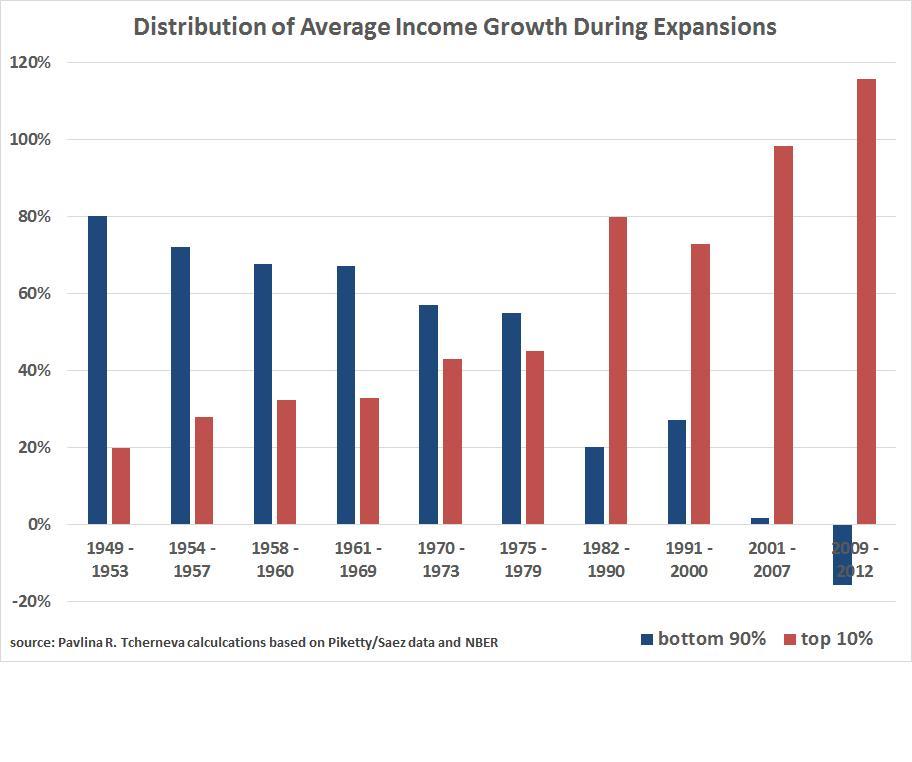 There are several ways to read it, but what I found most helpful was to think of the “top 10%” as the richest person in a group of ten people, and the increase as 10 dollars. Given that, the increase in wealth was distributed as follows:

When it comes to economic systems I have no dog in the fight, so this chart evokes only curiosity in me, to wit: what story does a defender of the current global economic system tell that portrays this trend as fair?

Nice quote from Norbert Weiner’s The Human Use of Human Beings, published in 1950 (via Nicholas Carr, emphasis added):

Let us remember that the automatic machine, whatever we think of any feelings it may have or may not have, is the precise economic equivalent of slave labor. Any labor which competes with slave labor must ac­cept the economic conditions of slave labor. It is per­fectly clear that this will produce an unemployment situation, in comparison with which the present reces­sion and even the depression of the thirties will seem a pleasant joke. This depression will ruin many indus­tries — possibly even the industries which have taken advantage of the new potentialities. However, there is nothing in the industrial tradition which forbids an in­dustrialist to make a sure and quick profit, and to get out before the crash touches him personally.

Traditions aren’t inevitable, we create and shape them.

Actually more than two, but these are the ones I want to highlight.

I’ve been in El Paso with my dad for the past three weeks, and on Tuesday my daughter Maggie came for a week’s visit. She’ll leave this coming Tuesday, and I’ll leave the following day. On Thursday we took a day trip up the Rio Grande Valley: Alamogordo Space Museum, White Sands Monument, and Hatch NM for lunch at Sparky’s, home of the world’s best green chile cheeseburger. It probably wasn’t the world’s best cheeseburger, but still the best cheeseburger I ever ate–just a bun with the meat would have made me very happy, the cheese and chile just made it better.

And for lunch today Maggie and I went out to El Sarape for a bowl of posole, a sort of red chile soup with hominy and chunks of pork. It looked more or less like this.

I didn’t intend this to become a series, but things keep popping up that fit with the theme. This article is worth a look, not so much for the familiar story of pastoral sexual abuse it tells, but because it appears in World Magazine. And what caught my eye was this. [emphasis added throughout]

Stories like this are becoming distressingly familiar. Over the past year WORLD has reported on both sexual and financial scandals, though not all of them rise to the level of the heinous crimes committed by Bobby Price, but all of which have two things in common:

Persons in authority took advantage of those who revered them, and persons who knew what was going on failed to speak up. They remained silent out of a misplaced sense of loyalty, or self-interest, or a lack of courage, or because they were too busy or told themselves it was someone else’s job.

Whatever excuse they gave for their silence, the result was always the same: a greater tragedy and more victims than if they had spoken up, or spoken up earlier.

I think the writer is correct about the first, but wrong about the second. In fact, his claim makes no sense, since he can’t know that their speaking up would have resulted in a lesser tragedy or fewer victims.

There is mounting evidence that just the opposite is true. Speaking up in the context of the church makes little difference. Speaking up offers no protection or relief to the victims, only revenge (and only occasionally that). Even in the story the writer tells, people did in fact speak up.

I also told him I had heard from credible people about sexual impropriety at the church.

But the word of credible people made no difference. World Magazine “ultimately published more stories that helped lead to the resignation of Bradley Price and the departure of most of his family members from that church”–only to move on to other churches where they found fresh victims. Only the civil authorities provided relief.

As I wrote in the previous post in this series: To those who say that to be a Christian one must be under some sort of authority besides that of King Jesus, I hope that you are prepared to explain either (a) how the normal Christian in search of authority can discern that the authority exercised by these pastors was illegitimate and therefore can righteously be rejected or avoided, or (b) that such abuse is just par for the course, something to be expected and endured in the normal Christian life.

That’s the title of Seth Godin’s latest post, and he makes an excellent point:

Soccer and football exist in school not because there’s a trophy shortage, not because the school benefits from winning. They exist, I think, to create a learning experience. But when we bench people because they’re not naturally good, what’s the lesson?

If you get ahead for years and years because you got dealt good cards, it’s not particularly likely that you will learn that in the real world, achievement is based as much on attitude and effort as it is on natural advantages. In the real world, Nobel prizes and Broadway roles and the senior VP job go to people who have figured out how to care, how to show up, how to be open to new experiences. Our culture is built around connection and charisma and learning and the ability to not quit in precisely the right moments.

As we raised our kids, and continue to raise them, we kept competitive activities near zero. We also left their gifts mostly alone to flourish as they would, focusing instead on teaching them to compensate for their weaknesses and to be diligent in necessary things that were distasteful or didn’t come naturally.

What if we celebrated the students who regularly try the hardest, help each other the most and lead? We if we fast tracked those students, and made it clear to anyone else willing to adopt those attitudes that they could be celebrated too?

What if you got cast, tracked or made the cut because you were resilient, hard working and willing to set yourself up for a cycle of continuous improvement? Isn’t that more important than rewarding the kid who never passes but still scores a lot of goals?

Before you feature a trumpet prodigy at the jazz band concert, perhaps you could feature the kid who just won’t quit. No need to tell him he’s a great trumpet player–the fact is, none of these kids are Maynard Ferguson–just tell him the truth. Tell him that every single person who has made a career of playing the trumpet (every single one of them) did it with effort and passion, not with lips that naturally vibrate.

This is not anti-meritocratic. Society can still order itself according to the merits of its members. But what it avoids is the twisted mentality that comes from gaming the system, from confusing merit with the appearance of merit. William Deresiewicz’s recent book Excellent Sheep describes what is now needed to gain admittance to an Ivy League school:

Only five or six extracurricular activities? Those are slacker numbers. Does the applicant have “good rig” (academic rigor)? What about “top checks” (highest check marks in every conceivable category)? Is he or she “pointy” (insanely great at one thing)? How are his or her “PQs” (personal qualities)? Or is your child, as one committee member said of an applicant, “pretty much in the middle of the fairway”?

Amazing that they pay attention to the quantity at all, but what else can they do when faced with thousands upon thousands of applicants, year after year? And once applicants learn that the judges have been reduced to counting, what else can they be expected to do but multiply activities, top checks, PQs, no matter their value?

Long ago I gave up listening to “promising” young musical performers, because all I was hearing was pale, incompetent imitations of successful adults. Why would I want to hear the inferior imitation instead of the much better original? On the other hand, I love to hear a young one use their skills as they are to sing or play something heartfelt. Only a few months after starting to sing and play, a very young Chris made a tape on his own initiative of a few songs he had learned. I listen to it occasionally, and tear up–at his joy in making music, at his eagerness to use his skills to please his listeners.

We didn’t know then where his musical giftedness would take him. In fact, we had good reasons early on to discourage any interest in a musical career, knowing the kind of life most professional musicians are forced to live. But it ended up being a vehicle for important life lessons–do things well, show up on time, cultivate a clear-eyed understanding of your strengths and weaknesses, understand that it’s not about you but the audience. Chris could have gone far further professionally if we had placed the emphasis where it usually ends up, on meritocratic success. Instead we taught him how to play the game with honor and integrity. And now he can play any game he chooses in the way it should be played.